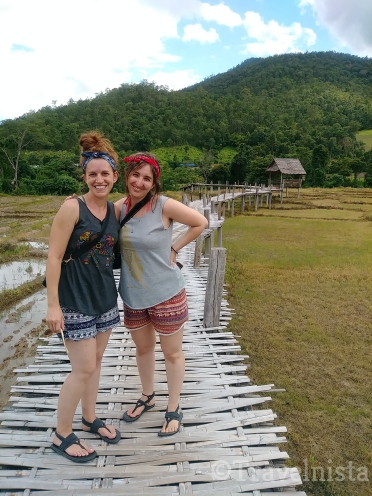 When I was studying abroad in Spain in college my parents visited me in Toledo after the semester ended. We decided to explore Madrid for a weekend. While there, I ran into a former classmate of mine from a photography course on a street corner. She informed me she was studying abroad in the southern Spain as we caught up. Had I been at the street corner two minutes later than her or had she decided to visit Madrid the following weekend, we never would have met again. Even though I didn’t see her after Spain, this interaction really made me realize how small of a world we live in.

There are so many factors and variables that go into meeting people and the impact that they will have on us. Had I not met Miranda in California while working as a traveling OT, I don’t know if I would be in Thailand at this time. It’s just so crazy to think about how people meet and what brings them together. Miranda and I met through an owner of a house in Monterey when I was trying to find accommodations for an upcoming travel assignment. The owner gave us each other’s contact information as Miranda was her tenant and we were both traveling therapists. What was even more random was that we worked for the same traveling company. Since meeting, Miranda and I have had many great adventures in Monterey, Iceland, and now Thailand.

My friend Alyssa and I also met in a very interesting way. We were in Cusco, Peru as volunteers 3 years ago. With a program of about 20 volunteers from all over the world, Alyssa and I were both from Wisconsin. What are the chances of that? And now we will be reuniting in a few days to go on another journey through southern Thailand together.

Even on this trip in Thailand, it’s crazy how you can meet people and be connected to them briefly or for longer periods of time. Miranda and I were able to meet up with Lina, my airport buddy from France, to explore Chiang Mai on Monday night. We also met a girl who is traveling to the islands of Thailand to become a certified yoga instructor from Ohio named Lexy while on our elephant tour. Lexy showed us an amazing view of Chiang Mai poolside from her Airbnb after the tour. I will likely meet up with her when I am in Southern Thailand again in the next week as we will be nearby to one another.

I love how traveling makes the world a smaller place by connecting people. Sometimes this can be for an hour or two and other times for years. Each person we meet has an impact on us whether it is big or small. The small ones also have a way of accumulating into something quite large over time. Even though the planet can be a big and overwhelming place, sometimes it’s smaller than we think as we form relationships with others. The world has an extraordinary way of bringing people into our lives when we least expect it.

When we first arrived in Chiang Rai, Miranda and I agreed that we’ve never felt more like foreigners. We had the main phrases written down in Thai but that was about all. The brain has a funny way of working. For some odd reason, whenever I wanted to communicate to someone in Thai, I would revert back to Spanish if they didn’t understand me. Miranda found herself doing sign language on one occasion. Many times, locals would stare at us blankly when we were trying to communicate with them. Our host Ulf happily told us that he likes to roll down his window and yell “foreign” when he sees someone who is visiting the city. Ironically, Ulf is from Germany and has blonde hair and blue eyes so I’m guessing whoever hears him doing this is be a bit confused as to why. Nonetheless, I’m pretty sure if Miranda and I weren’t staying with Ulf he would have been yelling foreign at us because we definitely stuck out. Despite the fact that we didn’t always know what was going on or how to communicate our needs verbally, Miranda and I have been able to connect with others in Thailand.

After traveling through Europe, South America, and now Thailand, when it comes down to it I think the majority of people have more similarities than differences. Yes, there will always be people out in the world who don’t care about others. That’s everywhere. However, from my personal experience that’s few and far between. Overall, I think that most people really just want to be connected to others while figuring out their lives. After all, humans are social beings by nature.

Throughout this trip, there have been so many instances where laughter has really been a binding force. When Miranda and I visited Wat Rong Suea Ten (e.g. The Blue Temple), we were greeted by what appeared to be a local on the staircase leading up to the Blue Temple. He couldn’t stop laughing when he asked us using gestures if we could take a picture of him standing in front of the temple. This man then asked Miranda and me if he could take one with each of us. We both thought it was so funny that we got one with him as well. Whenever I look at the picture of us together it cracks me up and I can’t stop laughing at how happy both of us were. Even though I’ll never see him again, we’ll always share that snapshot together laughing.

I forgot how important it is to laugh through your struggles. It can also become infectious. A few days ago, Miranda and I were getting a Thai massage. I don’t remember what happened but one of us started to laugh and it was contagious. After a few seconds, Miranda, our massage therapists, and I were all snickering uncontrollably for about 1-2 minutes. This is probably one of my favorite memories from Thailand because all four of us from all different walks of life were on the same wavelength connecting through laughter.

Another instance where laughter was vital was with our taxi driver Cha-veng in Chiang Rai. Even though he spoke Thai and we spoke mostly English, we were able to communicate with each other. Did we play gestures with Cha-yeng with certain phrases? You bet. We were able to laugh and keep communicating through the language barrier? Of course. Cha-yeng taught us many basic phrases in Thai. Most of which, we are continuing to use on our travels throughout Thailand. He taught us the pronunciation of these phrases as the tones vary and can change the meaning of what you are expressing. Again, laughter helped us bond with each other. During our 3-hour car ride from Chiang Rai to Chiang Mai, we would try to pronounce the cities and he would correct us. Although we weren’t able to have long conversations with him, we shared a meal with Cha-yeng and laughed most of the day away. This is also a memory that will stick out for me during my trip to Thailand.

Traveling to another country where the primary language is not your own can be incredibly intimidating. I have so much respect for people who come to the United States where English is not their primary language. It can be challenging and frustrating when you aren’t able to express your desires and may not fully understand the customs of another country. What I have also learned on this trip is that a smile and laughter can go a LONG way. You can find laughter wherever you may be heading. It really is everywhere.