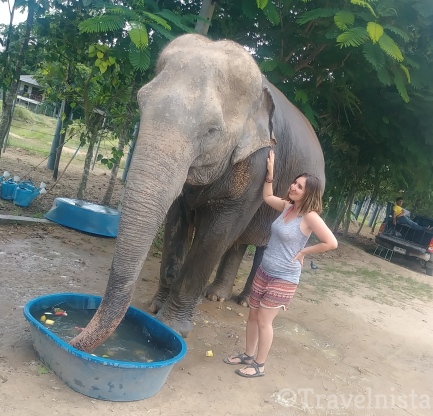 Last week, I went to visit elephants at the Wildlife Friends Foundation in Thailand. This was my second time seeing these amazing animals during my trip. From the start, my friend Alyssa and I were impressed with our visit. Staff were incredibly informative, giving us in-depth information about the elephants and other animals at the Foundation. The majority of elephants that we saw had been rescued from tourist organizations that promote elephant shows and riding. After hearing the unique stories about each elephant, it helped make me aware of how cruel many trainers and businesses can be to these animals while making a profit from tourists who may be unaware of what is occurring behind closed doors.

Before a friend informed me that it was considered inhumane to ride elephants, I had planned to do just that. During our day trip to the Wildlife Friends Foundation, staff educated us on why riding elephants is so harmful. When elephants are captured from the wild, many times trainers will break them down and “crush their spirits” so that they become passive and obedient. They will use a bullhook to pull on an elephant’s ears when riding them as part of the training process. If the elephants do anything that the trainer does not deem appropriate, the bullhook will be presented to them as a consequence. Other training methods involve pulling out the hair on an elephant’s tail. Some of the elephants that we saw that had been rescued did indeed have their hair pulled out from their tails and flaps in their ears from the use of a bullhook. During our tour we were also informed that when elephants are captured in the wild or if they give birth, many sites will separate the mother from their child.

The Foundation also educated visitors on why it is so harmful to ride elephants. The main reason for this is due to their soft spines. When saddles are placed on their backs and individuals ride them throughout the day, this shifts the distribution of weight on their backs. Many times elephants will develop sores from saddle riding and the curve of their spine will become distorted. When my friend and I visited the city of Ayutthaya, we both became angered when we saw tourists riding these elephants. I’d like to think they didn’t know that this was bad for the elephant but part of me wonders how they couldn’t. There were about 5 elephants in total. All of them had shackles on their legs. With a closer look, Alyssa and I could see that much of their hair was ripped out of their tails and they had tears in their ears from use of a bullhook. Riding elephants in the city can also be dangerous due to the potential of cars hitting them, which can result in deaths. While at the Wildlife Friends Foundation, we met one elephant that had been hit by a car. Due to this, she had a permanent limp on her left rear leg and was not able to bear weight on it when standing. Our group was informed that riding elephants has been illegal in Bangkok for about 10 years. However, this does not appear to be the case for other parts of Thailand. When tourists were riding these elephants in Ayutthaya, other individuals on the street would stop to take pictures with them smiling from ear to ear. Knowing what we learned I couldn’t help but feel incredibly sad for these elephants.

Visiting the Wildlife Friends Foundation also made me realize that similar to humans, trauma can have lasting effects on elephants. Symptoms comparable to PTSD occur in elephants that have been tortured. One that was rescued and brought to the Wildlife Friends Foundation was reported to have stereographic, repetitive movements. As an OT, I have taken a few courses on trauma and abuse in children. What triggered my interest at the site was some of the similarities between patterns in humans and elephants exposed to abuse. One course I have taken discussed how individuals who have been exposed to trauma hold this in their bodies. Research is beginning to illustrate the importance of releasing this trauma through physical movement, which is what it sounds like what these elephants are also doing at the Foundation.

Prior to visiting an elephant foundation or site, it’s important to try to do as much research about the company beforehand. I’d like to think that the first elephant site, The Elephant Jungle Sanctuary in Chiang Mai, was as ethical as the Wildlife Friends Foundation that I visited. However, now I have some doubts and concerns. When my friend and I planned to visit the Elephant Jungle Sanctuary we thought it was ok because of their mission statement claiming it was ethical to elephants in addition to the no riding policy. We weren’t able to find any negative reviews about this site but now I am very skeptical. Initially, I thought the elephants were treated ethically because they were free to roam around and eat throughout the day in the jungle. Now I think that we were duped. After further investigation, I found an article from a former visitor who stayed overnight in Chiang Mai. She took video footage of these elephants being shackled overnight (refer to link below). After thinking more about our visit, other red flags that come to mind is the limited information we were given about each elephant at the Elephant Jungle Sanctuary and the fact that there did not appear to be any rules or limits to tourists visiting with these elephants. What I loved most about the Wildlife Friends Foundation was that they educated everyone on how prevalent elephant cruelty is and discussed each elephant in depth. It was quite clear that elephants needs came first over visitors. The staff were very invested in their wellbeing. They protected the elephants from visitors and had clear rules and guidelines for us to follow.

Elephants are magical animals that have a right to live in the wild. Unfortunately, in Thailand many of them are captured and taken into the tourist industry for shows or trekking. Visiting the Wildlife Friends Foundation has opened my eyes to much of the cruelty that elephants endure. It has also made me aware that even if an organization claims to treat elephants ethically and calls itself a “Sanctuary” this may not be the case. The Wildlife Friends Foundation stressed the importance of spreading the word to end cruelty of elephants. After realizing the first site I visited was likely not as “ethical” as it claimed to be, I am trying to share my experience about this so that someone else may not make the same mistake that I did. If you are planning to go to Thailand or any other country that has elephants, please keep this information in mind. Please help spread the word about elephants. 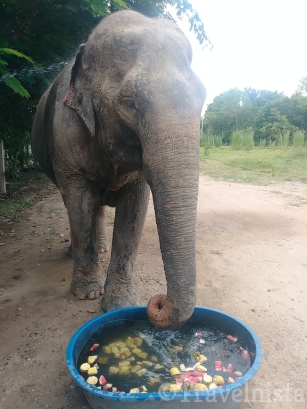